A global survey by PwC of more than ten thousand people reveals that 37% of the world’s population is worried about automation putting jobs at risk. And they are right to be concerned.

British researchers Frey and Osborne from the University of Oxford were already predicting back in 2013 that 47% of all jobs in the US would be handled by computers by 2033. In 2014, researchers at Deloitte investigated how this prediction would affect the Netherlands and concluded that between two and three million jobs would disappear from the Dutch labor market by 2030.

In 2018, the World Economic Forum (WEF) didn’t pull any punches either: Its report The Future of Jobs states that the percentage of task hours carried out globally by machines will rise from 29% to 42% between 2018 and 2022. And a recent PwC report about the “future of work” states that some sectors and roles, possibly entire occupations, will disappear completely.

It’s definitely not all bad news, however. Although the WEF believes that some 75 million jobs worldwide will vanish between 2018 and 2022 as a result of automation, a total of 133 million new roles will be created in the same period — jobs that stem purely from automation. These roles are at the interface between humans, machines and algorithms; from data analysts, AI developers and process automation specialists to information security experts and human-machine interaction developers.

This trend is in line with historical figures. In 2017, McKinsey calculated that between 100,000 and 120,000 jobs were lost every year between 1999 and 2010 in nine European countries that were leading the way in ICT development (including the Netherlands), but that 200,000 jobs were also gained. It’s no coincidence that there is still a shortage of skilled labor on the job market. 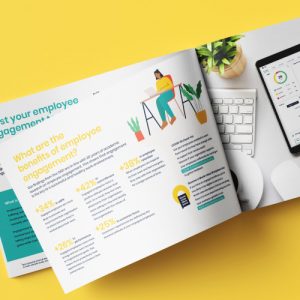 More-highly skilled workers are likely to benefit most from this trend, according to the “Effecten van technologisering” (“Effects of technology”) report from SER published in March 2019. The report states that this group is more likely to have jobs that complement innovations in technology, and that new technology requires greater knowledge and therefore offers more opportunities in particular to those with more advanced skillsets.

Frey and Osborne, too, predict that not everyone will lose their job. They believe that there are two job types that are difficult to “robotize” — those that involve developing new ideas and products, and those that require a high level of social intelligence.

By extension, over the next decade employers will have an even greater need for staff with skills that computers lack: creativity, flexibility, leadership qualities, problem-solving ability and communication skills.

As an HRM department, how can you make sure you’re ready for these developments? How will you ensure that you have enough of the right skills in house? “By 2022, no less than 54% of all employees will require significant re- and upskilling,” according to the WEF.

Talent management is therefore essential. “Understand the skills you have in your workforce now (not just the roles your workers currently do) and the gaps to the skills you will need in the future,” states the PwC report quoted previously.

Rewarding willingness to change and agility

Thinking in terms of skills rather than roles can definitely be a very illuminating approach. What are a person’s strong points? And which roles might make even better use of them? This sort of thinking might reveal that someone who has spent the last 20 years working in a technical department is the ideal candidate to retrain as a developer or ICT project manager. More importantly, they may actually be raring to make that change.

Never assume that staff are not agile or open to change; the only way to find out whether that is the case, is to give everyone the same training opportunities. And if you then still need staff who is able to handle change well, you could consider switching as an organization to assessing staff not just on their general role, but also on their willingness to change. This is a good way to show that you value this quality.

In the future, qualities such as flexibility, problem-solving ability and creativity will become even more important than professional knowledge and experience, so you may also need to adjust your recruitment policy and seek out people with a growth mindset.

According to PwC, you will also have to go off piste and “redesign traditional ‘one-size-fits-all’ HR programmes and policies to deliver on new learning and development models, career paths, capability models and the redesign of jobs and compensation frameworks.”

Where staff already have good digital dexterity—e.g. through training, experience or natural ability—it’s also important to give them plenty of opportunity to showcase their skills. They are the ideal people to get innovative projects off the ground and make them a success, and they can also advise on setting up digital upskilling pathways.

The digital aspect of most jobs is expanding, so simply relying on recruiting slightly more people with technical skills isn’t enough; you need to focus on growing the digital skills of all your staff. In many cases, that means making radical changes to the corporate culture.

If you’re wondering where to get started with this cultural change, then social innovation is a tried-and-tested method. You could put out a call within your organization, for example, for people who want to help think of ways to increase digital dexterity among staff.

That call might appeal to beta personalities among your staff. Form a brainstorming group made up of six to ten employees and task the group with formulating advice on between five and ten measures. Set a number of clear boundaries, like a maximum budget, but then take a back seat so that these digitally dexterous people feel they have enough freedom to come up with truly fresh ideas. This allows your organization to make internal preparations in good time in order to guarantee a successful digital future.

The PwC report Workforce of the future states that there are three levels at which organizations can use artificial intelligence.
1. Assisted intelligence
AI can help people and organizations to improve what they are already doing; for example, navigation software that uses GPS to give directions and make adjustments to avoid queuing traffic. This kind of AI is already widely available.
2. Augmented intelligence
AI can also help businesses to provide new products and services; for example, car ride-sharing services like Greenwheels, ConnectCar and Car2go. These services would not be possible without automation.
3. Autonomous intelligence
AI can also operate autonomously; for example, machines that act on their own, such as self-driving vehicles.

Job losses due to AI and robotization

Back in 2013, British researchers Frey and Osborne from the University of Oxford predicted that 47% of all jobs in the US would be handled by computers by 2033. They calculated that percentage by categorizing 702 occupations by the degree to which they required skills in which robots are weak, such as subtle motor skills and creative and social intelligence? If an occupation didn’t require these skills, or required them only minimally, Frey and Osborne assumed that robots would take them over in the future. Their model predicted that most workers in the production, transportation and logistics sector, together with the bulk of office and administrative workers, were at risk.

AI and robots don’t need to eat or sleep, don’t want to go on vacation and don’t organize strikes, all of which means that production costs can be reduced; a benefit that increases as robots become more affordable.

According to the PwC report Workforce of the future, we will have experienced major technological breakthroughs by 2030. Automation, robotics and artificial intelligence are developing at lightning speed, drastically changing the number and type of jobs available. Technology can improve our lives, boost productivity and increase our standard of living and our life expectancy. But, according to the report, technology can also be a threat, cause political protests and social unrest and drive an unequal distribution of prosperity.

Technological unemployment: What’s next? How to use people analytics for an effective COVID-19 response Purpose of HR analytics